In my previous blog article I analyzed the dynamics of jaw-closing in 6 postulates. The take-home-message of my previous blog article was: The sensory afferent information of pressure-loading in periodontal ligament from anterior teeth produces a completely opposite reaction in the direction of muscle activity as compared to the sensory afferent information of the back teeth.

The postulates 1 to 5 should hopefully have been quite self-evident for anybody with an interest for the dynamics of occlusion. However, I have never seen an article that would sum up the concept, which I presented in my postulate 6.

The sensory afferent information from teeth 1-2-3, from the midline shuts down the activity of the vertically down-up directing masseter-temporalis jaw-closing muscle group of the phase-one of jaw-closing. By means of sensory-motor neural control via the brain-stem, the antagonistic pterygoids-set of muscles on the working side take over, and the movement of the mandible takes a new turn towards the midline. This idea did not come to me just by biting on a piece of apple. For at least two decades it has been my everyday practice to always try to arrange my patient’s dentition in such a way, that the red ink paper that I use to check the lateral excursions, always draws a beautiful straight line on the palatal aspect of upper canines and the buccal aspect of lower canines, respectively. Most often, to change the patient’s bite is not an invasive procedure. Instead of grinding down of tooth enamel, I try to figure out, what would be the ideal form and shape of my patient’s canine teeth to provide an immediate and smooth disclusion of the back teeth in lateral excursions. All it takes a piece of rubber dam and a clamp, a bit of engineering spirit and a little of artistic touch, as I layer out different shades of composite to make beautiful canine teeth. Overwhelming majority of my patients respond positively to this intervention. They normally say that the bite is different, but in a good way, it is more stable. The Tscan movies illustrate the difference after the establishment of canine guidance.

In the first video clip even an uninitiated dentist can see that the bite does not look good. Pay attention to the slight jaggedness of the black total force curve. The staggering line illustrates the tug-of-war between the closing and opening reflexes. In the Tscan movie software, time is divided into sections. “A” marks the first occlusal contact of closing. During the time span from “A” to “B” increasing number of occlusal contacts appear until the maximum, as calculated by the software program. The black total force line normally rises a bit after the maximum number of occlusal contact points is reached. The “B” to “C” part of the graph designates the power-clench that takes place after the teeth are set for maximum intercuspidation. In this movie, I instructed the patient, actually  she is my daughter, to perform an excursion of her mandible to the left. The lateral excursion is happening after time point “C”. That part to the point “D”, where there is only one single load beearing tooth takes a loooong time…

Keeping in mind the postulates of jaw-closing, it is crucial to understand, that when we examine the lateral excursions of our patients, we actually are examining almost exactly the same path of gliding occlusal contact points, inversed, that take place in the mediotrusive phase-two of jaw-closing. If I just could be able to flip this .mp4 file to run backwards, you would see just about what was happening in my daughter’s mouth every time she was trying to chew gum. Well, she couldn’t chew gum. That would have triggered the migraine. See, how the occlusal force pillars in the molar area suddenly surge up high and red. Imagine the amount of distress, friction and tug-of-war taking place in her occlusal system thousands of times every day. There is a golden advice for any of your patients suffering from TMJ and occlusal instability: “Don’t bite”

Since my daughter refused to obey my advice, I added composite to her canines, but I also had to bevel out some parts of the most off-the-Camper-line cusp tips of her back teeth in the maxilla. Here you can see her perform her left lateral excursion now

Her headaches vanished the very day that the canine guidance was established in her dentition. The first video was a “bad bite” and the second one is a “good bite”. Comparing these two videos gives you some idea what amount of information there is in a Tscan movie. The use of Tscan has reassured me in my almost career-long belief, that the anterior teeth should bear the occlusal load in lateral movements. Except, that now it is no longer matter of believing, the facts are there, on my computer screen.

Seeing the occlusal interferences of laterotrusion developing in a slow-motion movie has greatly improved my ability to find out the trouble spots of my patient’s occlusion. Individual prematurities in the premolar and molar teeth during lateral excursions, are not easy to detect. When examining the lateral excursions of my patients, the red ink marks that are produced by prematurities on the palatal and buccal inclines of the back teeth are often only wispy dots. Only seldom do the interferences of the back teeth appear as continuous lines, quite unlike they do in canine teeth. Before the Tscan it was quite impossible to distinguish the lateral interference foil-marks from the dots marking the occlusal height bearing spots. This used to be my distress. I was discouraged to do permanent enameloplasty if I was in doubt of my foil marks. Nowadays I compare the foil marks with a Tscan-movie. I can see it is a fact, that the appearance of a foil mark, light or strong, actually has no connection to the force that caused it. By following the Tscan movie I can adequately distinguish even the wispiest ink dots and assess their importance for the smoothness of the medial glide of the mandible of my patients.

There is something very frightening in this image. 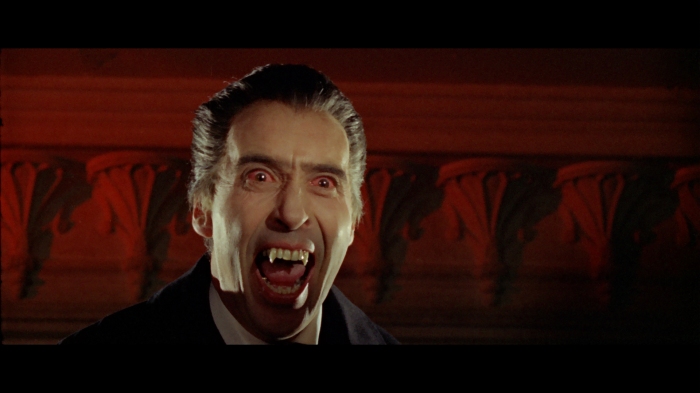 The Hammer Films  has provided Christopher Lee with a set of goodish size canine teeth. I am a great admirer of late Christoper Lee’s art, but in this image there is something too terrifying in it. With canines like that I couldn’t imagine of myself punching holes in throats of blonde girls however tender-pearly-white skins they would have. I mean, under the softest alabaster skin, an unexpected collarbone might be lurking. Hitting a collarbone with such canines would immediately result in an opening reflex…I couldn’t bear the shame of the disaster of a terrified victim screaming and running away from my hold…

Regarding myself as a man of science, I rejected the fancies of film industry and turned my interest to the real vampire-bats of nature. How do they cope with the risk of hitting a collarbone of their victim’s? A google-pics search provided me with a following beautifully naturalistic drawing of the skull of a vampire-bat

(For the use of this picture I am most thankful for the artist Vishnu Prasad, for more of his art, please visit https://www.instagram.com/artgeek09/)

It is the same thing with other beasts of prey. Lions, tigers, wolves. They don’t ruminate. They use their teeth to catch the leg of an antelope and once they get a grip with their teeth, the grip holds

Look at that skull of a wolf in the Helsinki Zoological Museum. The big canines are not the front teeth, they actually are the first premolars. That’s the tooth number four from the midline, and that’s how Nature has it planned, for a good reason. Function makes the form. The condyles of dogs and wolves are small, but the masseters can produce huge closing-of-the-jaw forces. The huge first premolar-canine of the beasts of prey provides just the sort of sensory feed that enhances the closing-in activity of the masseter. The price they pay is the lack of lateral movements. Your pet dogs don’t do lateral excursions so much. They cut pieces of their chewing -bone with vertical movements of their mandible. The shape of the dental arches is more like a rectangle, not parabolic. There does not seem to be a phase-two of jaw-closing in dogs. The direction of the jaw-closing remains the same all the way. Would there be a slight laterotrusion in the rudimentary condylar system of dogs, the first tooth-to-tooth contact point would be the dog-canines i.e. the tooth number four, according to the Universal Law of Jaw Closing.

The opening reflex that is so vital for us humans to chew our food exists in the dogs also. Dogs don’t like to chew their chewing-bones with their front teeth, they always grab it by the side of their mouth.

In conclusion, the sensory-motor control of the chewing pattern of humans is guided by a system that is common for humans, lions, wolves and probably even the vampire-bats. I have never seen any scientific articles demonstrating qualitative differences in the anatomy of afferent innervation of the front teeth as compared to the back teeth. From my reasoning above, however, one tends to speculate there still is something in the sensory-motor control of occlusion that we have been unaware of. There must be something between the tooth periodontium and brain stem, where the sensory information regarding pressure changes switches over to the opposite, regarding whether the afferent information is coming from the front or back teeth.